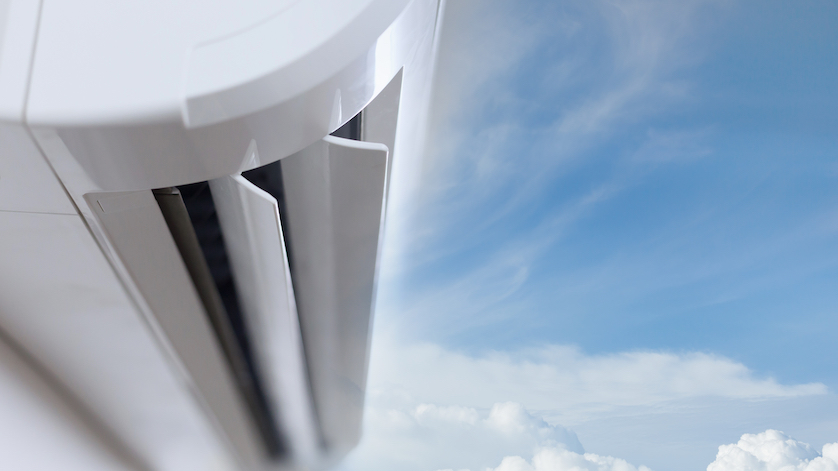 Throughout history, certain inventions have greatly improved people’s quality of life. Among those is air conditioning.

Heating has never been much of a problem: humans figured out fire and hearths about 2 million years ago, which allowed them to migrate to colder climates. Cooling, however, has long been a challenge.

Up until the late 1800s, air circulation (fans) and evaporative cooling were the main ways of beating the heat. In 1902, an engineer named Willis Carrier sought to solve the problem of high humidity, which was adversely affecting the paper rolls, ink, and machinery of a Buffalo (N.Y.) printing plant. One foggy day, as he stared at the mist, Carrier realized that air could be dried by passing it through cool water to produce condensation. Within a year, he had invented an electric-powered system to remove moisture from indoor air, which also had the effect of reducing the air temperature. Thus was the beginning of modern air conditioning.

Carrier could not have imagined the myriad ways his invention fundamentally changed how we work and live. Not only did printing presses operate better, but mechanical cooling improved the manufacturing of food, beverages, pharmaceuticals, and petrochemicals. Hospitals, retailers, theaters, and the transportation industry, especially air travel, benefited from being able to control temperature and humidity. By cooling server rooms and data centers, air conditioning also made high-tech computing and the internet possible. In short, AC gave rise to the global economy, not to mention made homes, offices, schools, stores, and houses of worship more bearable in sweltering weather. No wonder TIME magazine named Carrier as one of the 100 Most Influential People of the 20th Century.

More than a century after Carrier’s initial patent, there are several types of air conditioning systems in various sizes and with different technologies and capacities, depending on the area that needs to be cooled. Naturally, residential systems differ from commercial and industrial systems, as the spaces and user needs are different. 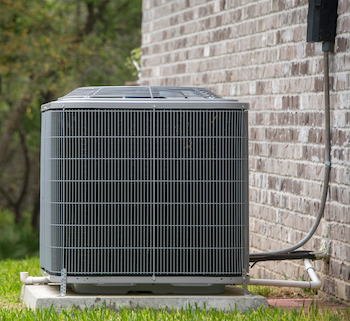 For older homes and buildings, standalone window units provide welcome relief during periods of high heat and humidity, but typically for only one room. Starting around 1970, central air conditioning became ubiquitous in US homes. It has the benefit of being quiet, unobtrusive, and effective at cooling an entire house. Forced air systems can run on electricity or natural gas, and are less expensive compared to newer technologies. The downside: they require a network of ducts, which is difficult and expensive to extend for room additions or to retrofit in older construction. In historic buildings, such retrofitting is undesirable or even impossible. 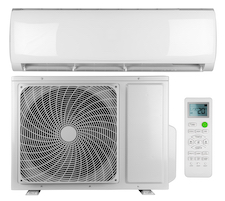 Mini-splits, which do not require ductwork and vents, are an excellent alternative to central air. The “mini” part of their name comes from the low-profile indoor evaporator unit(s), which are mounted on walls and require just small holes for the various lines: refrigerant, condensation drain, and electricity. The “split” part refers to the outdoor condenser unit, which is separate – or “split” – from the indoor unit(s). While mini-split systems are more expensive and have a lower capacity due to their smaller size, they are more energy efficient than forced air, thus costing less to operate. Many new homes and buildings in Europe and Asia are constructed with ductless mini-split systems, as they also serve as heaters and allow each room to set its own temperature.

The Japanese company Daikin invented VRF (variable refrigerant flow) in 1982, but this technology didn’t enter the US market in widespread application until the early 2000s. Its name comes from the outdoor unit’s inverter compressors and fans that vary their speed by adjusting the power supply. The changing rate determines how much refrigerant the compressors deliver. VRF is similar to mini-splits in that it has indoor/outdoor units, is ductless, and can heat as well as cool. The main different is that VRF units have a much higher capacity, making VRF a good choice for warehouses, industrial facilities, and commercial buildings. It’s also flexible: one system can heat or cool different zones in a building at the same time. 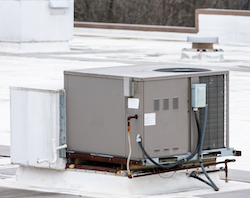 Many commercial buildings in the US and Canada have a packaged rooftop unit (RTU) for cooling and sometimes heating. As the name implies, all the HVAC components for the refrigerant (and heating) cycle are housed within one large metal box. In fact, one could think of this as a giant cousin of the standard window unit! Ductwork connects directly to the bottom of the RTU to deliver cooled air to the building below and receive hot air. (Packaged units can also have horizontal connections, if placed beside a building, for example.) RTUs started as constant air volume (CAV) systems, which means they had one fixed airflow rate optimized for one particular zone. However, this unvarying flow rate sometimes meant uneven cooling in some parts of the building and more air circulated than necessary in others. Variable air volume (VAV) systems solve these problems, increasing comfort and boosting energy efficiency. 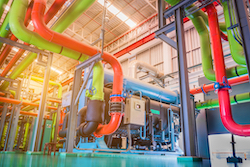 Water is both a thermal fluid and a refrigerant. In a traditional boiler system, found in homes and industrial facilities alike, hot water or steam radiates heat in indoor spaces. Conversely, a chilled water system absorbs heat as it pushes water cooled to around 45°F (7°C) through piping beneath floors, in walls, and on ceilings. This method can cool one building or, in the case of a chiller plant, serve several buildings or even an entire high-density area (district cooling).

Air temperature fluctuates wildly, but just 10 feet (3m) below the ground, it is a nice 55°F (13°C) all year round. Geothermal heating and geocooling are expensive upfront, yet they are attracting more interest as consumers and businesses seek ways to reduce energy consumption. Basically, these systems comprise a loop of buried pipes through which water circulates. In cold weather, air-temperature water is sent underground to warm; when it moves back aboveground, a heat pump increases the water to the desired temperature and sends it through pipes in the building. In hot weather, the system uses the same principle but in reverse. Without outdoor/rooftop units, geothermal systems are very quiet and aesthetically pleasing. But more than that, more commercial developers are aiming for LEED (Leadership in Energy and Environmental Design) certification for their projects, and alternative HVAC solutions like geothermal plays an important role in that goal.

This is part 1 of a series on HVAC technology and measuring instruments. Please see the next article about the vapor-compression refrigeration cycle, requirements of HVAC systems, and instruments for a healthier and more efficient HVAC system.

Felix Brockmeyer Vice President
Industrial Instrumentation
WIKA USA
I believe that organizational success comes from the teams that are part of it and the example leaders set. Over the last 18 years, I have held various different roles in management and leadership positions, and in all, I am trying to build self-sustaining teams. Great teams drive the successful realization of WIKA’s Mission – to contribute to our customer's success by offering superior solutions.
Related articles
Diaphragm seals Environment Failure Pressure Gauges Safety alternative fuel case study continuous improvement customer satisfaction customizable hydrogen vehicles partnership pressure measurement sanitary applications vibration
News subscription
The WIKA news subscription informs you, free of charge, by e-mail whenever there is a new blog article. Simply define what subjects interest you and you'll be kept up-to-date! Subscribe