Instrumentation that uses a float to measure level and transmit signals can be optimally adapted to challenging media conditions. WIKA’s level measurement engineers helped a major pharmaceutical company find a replacement for its older level sensors that were not as accurate as they should be.

Fermenters are an essential part of manufacturing and research in the pharmaceutical industry. Starting materials inside these bioreactors are fed nutrients and oxygen to produce new active ingredients and drugs. To ensure cells are multiplying properly inside bioreactors, technicians rely on level measurement instrumentation.

As effective as they are, though, level instruments in fermenters have to deal with two challenging issues:

There is a variety of good non-contact level measuring instrumentation available on the market. Still, when faced with the particular characteristics of media in fermenters, many devices fall short. For example, hydrostatic measurement methods with submersible pressure sensors are not suitable for mixtures with density differences. Radar instruments – even the guided version – cannot completely rule out reactions on the foam and, therefore, cannot determine the actual level with 100% accuracy. Float-based instruments, on the other hand, are not influenced by foaming, electrical conductivity, or dielectric constants. 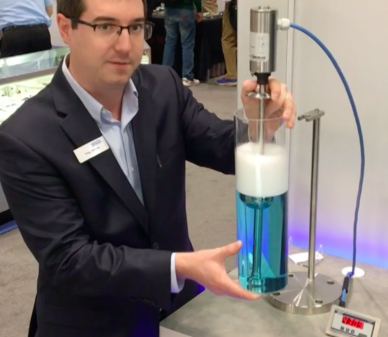 Trey Himes, a product specialist for WIKA USA’s level instrumentation department, demonstrates how a float-based level sensor sits on top of the liquid – completely unaffected by the presence of foam.

The design of a float-based measuring system is simple: A float with an inner tube and a magnet moves along a guide tube depending on the liquid level. The float acts as a signal transmitter, whose impulse is converted to an output signal. Floats can be individually adjusted to match the media conditions and process, and can be designed to always stay on the actual surface of the liquid itself and not the foam. They also can be shaped as balls for high pressures, or as cylinders for low pressures.

A major German pharmaceutical company that specializes in cancer therapies was having problems with the fermenters its research center used in a batch process. Capacitive sensors monitored levels in the six fermenters, but the instruments no longer met the manufacturer’s requirements for precision. Researchers at the center didn’t know what steps to take next, so they contacted WIKA for a recommendation. WIKA experts analyzed the precision requirements and the particulars of the mix in the fermenters, and came to the conclusion that the best option was to switch to float-based systems. They recommended replacing capacitive sensors with WIKA’s magnetostrictive sensors.

Model FLM-His a highly precise float-based sensor designed specifically for industries that have sanitation applications. The stainless steel instrument is fully welded with no dead spaces. The opening between the guide tube and the float is not susceptible to capillary effects or adhesive forces. It conforms to 3-A Sanitary Standards, which the FDA refers to as the hygienic equipment design directive. The entire level sensor can be cleaned without residues, making it suitable for CIP (clean in place) and SIP (sanitize in place).

One of the main advantages of this magnetostrictive sensor is that it offers users a smaller dead band – the zone at the top and bottom of a tank that falls outside the measurement instrument’s range – than the typical guided wave radar (GWR) system. With this smaller margin of error, users have more visibility into whether a tank is empty at the end of one batch process and before a new process begins

In addition, WIKA’s magnetostrictive sensor saves time and improves productivity because it does not require calibration – a major breakthrough in this market. Customers, including the pharmaceutical company, were devoting entire shifts to calibrate their GWR instrumentation, a process that should be done at least once a year. As the FLM-H is built to the exact tank height per the customer’s specification, it never needs to be calibrated.

In short, the FLM-H was a perfect solution for the research center’s application. The customer is extremely happy with the replacement. Thanks to the sensor’s very high resolution, researchers can now record levels up to 10 times more accurately than with the typical GWR system. Losses due to leaks are now at a minimum since operators are notified immediately of any unexpected drops in level. What’s more, the pharmaceutical researchers now enjoy greater productivity by not having to take time out for regular calibrations.

Float-based instrumentation can be optimally adapted to critical media conditions and provide guaranteed precision, a must in many pharmaceutical processes. Contact WIKA todayto learn more about the right level measuring system for your application.