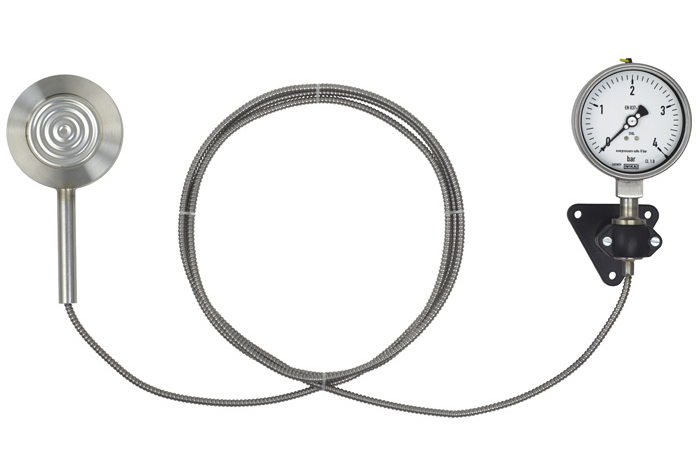 An instrument capillary line can serve a dual purpose. First, capillary lines, or tubes, are a convenient method for separating a pressure instrument such as a gauge or transmitter from the process connection so the reading can be taken at a more accessible location.

Second, capillary lines also serve the function of a cooling element in that a very hot or cold fluid equilibrates to a less extreme temperature as it travels through the line.

As a general rule of thumb, a diaphragm seal will protect a measuring instrument from temperatures between -40°F and +300°F. A heat-sink type cooling element is typically added to the assembly at temperatures between +300°F and +500°F. A capillary line can be coiled and used together with a diaphragm seal for measurement of processes at extreme temperatures above 500°F to 750°F. That said, the use of a capillary line also introduces new factors that must be considered. In order to get accurate pressure readings using a capillary line, you must take into account both temperature and elevation effects, as well as keeping in mind that there will be a lag time that correlates directly with the length of your capillary line.

Things to Consider with Capillary Lines

The engineers at WIKA point out that installing a capillary line on a mechanical gauge typically requires the use of a gauge support and gauge adaptor or some other form of surface mount.

A level difference between the pressure instrument and diaphragm seal (common with the use of a capillary line) creates a pressure indication error. However, a known level difference can be compensated for during the calibration of the diaphragm seal assembly. WIKA’s technical staff and engineering team are experts on applications for various pressure instrument accessories, including diaphragm seals, cooling elements, and capillary lines. Check out WIKA’s Diaphragm Seals FAQs or feel free to call or email WIKA with any questions about our products, installations, or warranties.