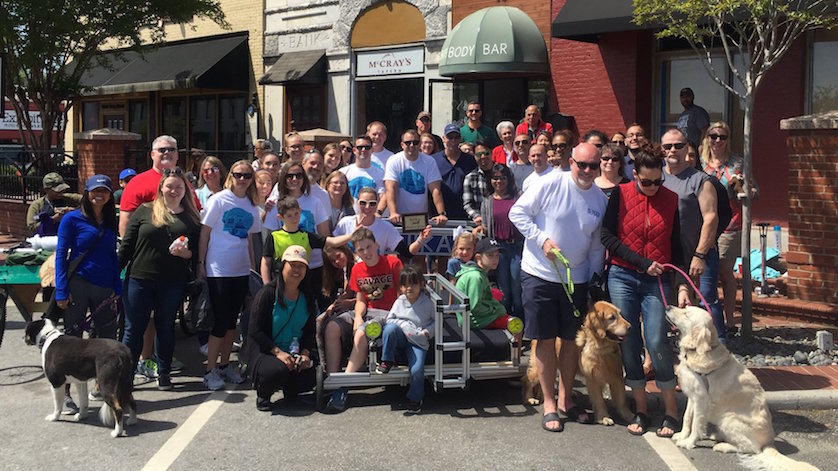 One of the core values at WIKA is community involvement. That’s why employees from the Lawrenceville, Georgia, headquarters of WIKA USA volunteered to run – and steer – in the 9th Annual Bed Race, a fundraiser organized by Family Promise of Gwinnett County to end homelessness.

It was mid-morning on a beautiful sunny Saturday, and Lisa Byard was in bed. Well, not just any bed, but one with four wheels, a steering mechanism, and two Bourdon tube pressure gauges with InSight dials as “headlights.” What’s more, she was getting ready to steer this bedmobile around the courtyard square in Lawrenceville, Georgia.

For the second year in a row, WIKA USA fielded a team for the Bed Race, a fundraiser organized by Family Promise of Gwinnett County to end homelessness. The company was a Gold Sponsor. 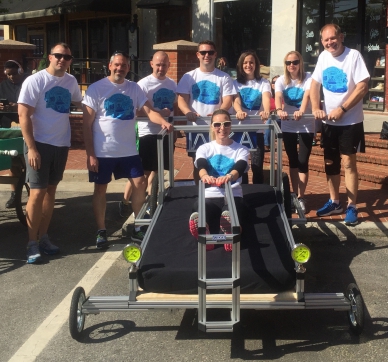 Behind every great four-wheeled bed are strong runners, and this year’s team was composed of several talented employees who happen to be athletic as well. Jon Clifford, Justin Williams, Trey Himes, and Hardy Orzikowski pushed during the first qualifying heat of the April 21 event. For the second heat, Julia Elsesser and Karen Florence took over for Clifford and Williams. Everyone wore T-shirts with the words “Bedder Together” – a play on the WIKA USA slogan of “Better Together.”

With the muscle power of Clifford, Williams, Dennis Knight, and Mat Brown behind her, Byard settled into the bed in preparation for the third and final heat. Beside the WIKA team was ViaSat, last year’s winner in the adult category. These two companies were competing for first and second place honors.

“Our team was definitely ready to win it,” Byard said. “Frankly, I literally felt one end of the bed rise up in the air from the force of the pushing. Everyone was giving it their all.”

Dozens of WIKA employees, family members, and their dogs cheered on the racers. The team made it around the first corner. This is not as easy as it might seem, Byard said. “I had to steer by shifting bars, and going around corners was tricky. It was very important to not cross into another team’s lane.”

Everything was going smoothly until after rounding the first corner, when a few spokes broke free from the wheel, which caused the back left tire to come off the axel.

Thinking back to that critical moment, Clifford said he had one thought: “This is not good. Can we still win?”

The runners quickly wedged the tire back in place and lifted that side of the bed so it was actually rolling on only three wheels. The team made it to the finish line.

WIKA came in second place for speed, but everyone – including the county’s homeless families – walked away a winner. Family Promise will use the money it raised to provide housing assistance and employment solutions for local families. As for those nine WIKA employees, they were able to uphold WIKA’s core value of community involvement and have fun at the same time.

“From a company standpoint, we believe in and promote social responsibility. It’s one of the core values at WIKA,” Byard said. “From an individual standpoint, it’s truly a good feeling knowing you’ve done something positive to help others.” 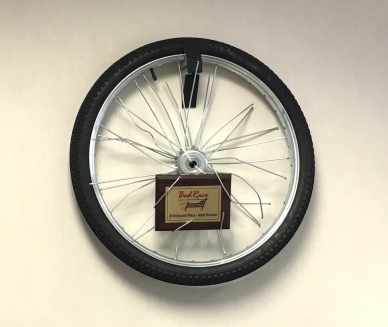 The broken wheel from WIKA USA’s bedmobile serves as both a holder for the team’s second-place plaque and an inspiration to win next year’s race.

Clifford agreed. “I appreciate how the Bed Race and WIKA’s core values help me become more conscious of our responsibilities to make the world around us a better place.”

After the race, team members removed the broken wheel, nestled the second-place plaque among the bent spokes, and hung it on a wall in the human resources office. It serves as a daily reminder of WIKA’s commitment to community involvement – and as motivation to bring home first place next year!

Jessica Woodside Senior Marketing Manager, Campaigns & CommunicationsWIKA USA
I have been working with WIKA since September 2017. I came on board with the company in a Campaign Strategist role, and was promoted to Senior Marketing Manager in charge of Marketing Campaigns, Content Creation, and Communications. I hold an MBA in Marketing from J. Mack Robinson College of Business at Georgia State University and a BA in Literature from the University of North Carolina at Asheville.
Related articles
Industry 4.0 Safety WIKA WIKA Insight WIKA career community involvement community service company culture continuous improvement core values customer satisfaction employee relations excellence force measurement sustainability
News subscription
The WIKA news subscription informs you, free of charge, by e-mail whenever there is a new blog article. Simply define what subjects interest you and you'll be kept up-to-date! Subscribe