The modern hydropower plant is a wondrous innovation based on millennia of human ingenuity. This article, the first of a three-part series, explores this technology’s history and the basic mechanics of how a hydroelectric power plant works.

Humans have long harnessed the energy of water to operate machinery. To this day, hydropower remains a significant source of electricity around the world. To ensure safety and efficiency, modern hydroelectric plants rely on an array of measurement instruments to monitor level, flow, pressure, and temperature throughout the processes.

For thousands of years, water has been the main source of power to run systems for grinding grains, irrigating fields, and processing timber. In the late 1800s, people started to use hydropower to generate electricity. The first commercial hydropower plant in the U.S. was built at Niagara Falls in 1879. Continuous improvements have made hydroelectric power plants safer and more efficient than ever. 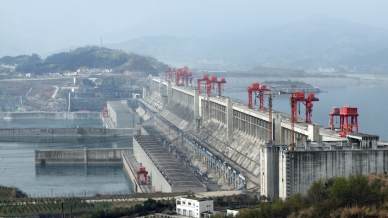 The Three Gorges Dam, on the Yangtze River in east-central China, is the world’s largest power station.

Today, hydropower is a major and reliable source of electricity. What’s more, it is clean and renewable. Because they are independent of weather conditions (except for drought), hydroelectric plants can provide more dependable service than solar or wind farms. In addition, the ability to control flow allows each plant to adapt its output to meet market demands. It’s no wonder that 9 out of the 10 largest power-producing facilities in the world run on the power of water. (Kashiwazaki-Kariwa in Japan, the sixth largest, is a nuclear power plant.)

How a Hydroelectric Power Plant Works

diagram of a hydropower dam

Basically, a modern hydropower plant is comprised of a reservoir, a dam, penstocks, turbines, and generators. The reservoir stores the “fuel” and allow operators to control how much water is fed to the turbines. It also serves as a decanter: Most of the dirt and debris in the water settle at its bottom and away from the intake area.

Water from the reservoir is delivered to the turbines through the intake (dam gates) and penstock. A filtering system at the intake further cleans up the water to ensure that it is relatively free of suspended solids, which could damage the turbine’s blades. Hydraulic systems – the governor, the brakes, the gate controls, and so on – work together to open and close the apertures that allow water to flow downstream from the reservoir.

The water wheel of the past has evolved into the modern turbine. Differing mainly in their blade shape and configuration, the three main types are the Francis turbine, the Kaplan turbine, and the Pelton turbine – named after their inventors. Regardless of design, the turbine converts the kinetic energy of moving or falling water into mechanical energy. The turbine is connected through the shaft to the rotor of a generator that converts the mechanical energy into electricity. For the greatest efficiency, turbines are custom-made for each hydroelectric plant.

While the concepts of hydropower are simple and straightforward, the operations are anything but. Each modern hydroelectric power plant relies on a multitude of complex systems that monitor, control, and improve conditions to ensure proper operations. Bearings and lubricating systems minimize friction and wear and tear in moving parts. Filters trap the particulate that can abrade turbine blades. Powerful hydraulic systems open and close the penstock gates. Cooling systems keep temperatures under control to prevent overheating and fires in transformers, cables, switchgears, and other electrical and mechanical mechanisms.

Don’t miss the next article: How to Monitor and Maintain a Hydroelectric Plant for Optimum Efficiency.