Most pressure gauges around the world have either an NPT or G (metric) connection for insertion into processes. It is useful to know their differences – and also how to recognize which type is in use – without having to remove the entire assembly.

Have you ever looked at a pressure gauge in a pipe assembly and wondered which connection type it has? Perhaps you have to replace a measuring instrument or need to buy a new one. One way to find out is to remove it from the installation and look at its threads, but this will result in downtime if the process is active. There is an easier way to tell whether a gauge has an NPT or G connection. 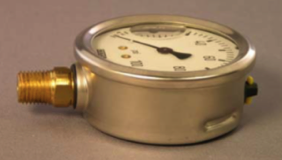 Most of the time, the answer depends on geography. In the U.S. or Canada, the pressure gauge will most likely come with an NPT (National Pipe Tapered) connection. This thread type, standardized by ANSI (American National Standards Institute) and ASME (American Society of Mechanical Engineers), is typical among North American measuring instruments, found in piping systems, pumps, compressors, plumbing systems, mobile working machines, and many more applications.

Male (external) NPT connections are somewhat conical, with the diameter of the threads decreasing slightly from socket to tip. Tapered threads seal along the flanks of the thread. Due to the spiral leak path, however, Teflon® tape (PTFE) or a sealing compound is required to create a good seal. The most common sizes for pressure gauge connections in the U.S. are ⅛-inch NPT, ¼-inch NPT, and ½-inch NPT.

The U.S. and Canada also use parallel threads like the NPSM (National Pipe Straight Mechanical) connector. However, this thread type is typically found as a female (internal) component in non-pressurized devices like thermowells.

The tapered shape of the NPT threads allows users to continue turning the connection several more degrees after making the seal – until the instrument reaches the desired position. Tightening, though, has to be done with care: Too much compression can lead to galling, and over-tightening can damage the threads. These situations are problematic in applications that require regular installation and removal of the pressure gauge. 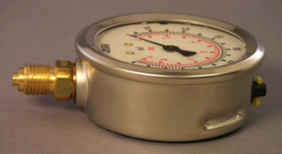 If the pipe assembly is in Europe, Asia, or Latin America – basically anywhere else in the world but the U.S. and Canada – the pressure gauge will very likely have the straight threads of a British Standard Pipe Parallel (BSPP) connector, denoted by the letter G*. The tapered variants from the BSP classification system are denoted by ISO7, for example R1/4-ISO7.

They are often referred to as metric connections because they are used in the metric system and the dimensions are based on metric measurements. G connections have a straight body (constant diameter) with parallel (straight) threads. The main purpose of the parallel threads is to contain the pressure, which allows for regular installations and removals without damaging the thread. A sealing washer is required to seal the connection. As sealing of the connection takes place on the washer and not on the thread itself, no sealing compound or PTFE tape is required.

Sealing washer on a pressure gauge with a G connection

Since the thread of a G connection will bottom out at the wrench flat, no threads are left exposed. Once the connector bottoms out to make the seal, the positioning of the instrument cannot be changed. To avoid the problem of awkward gauge positioning, use a “crush washer” and hand-tighten the connection. At the resistance point, approximately 1½ turns are left before the crush washer flattens out. This leeway allows the user to fine-tune the pressure gauge’s final position with a wrench**. If the position of the instrument is not critical, a flat washer can be used instead.

Eyeballing the Difference Between NPT and G Connections

When placed side by side, the difference between the two connection types is clear. The NPT thread is slightly tapered, while the G connection is straight. Another obvious visual: The G connector ends with a small protrusion (nipple), used to center the gasket. If calipers are handy, a third method is to measure the angle between threads: NPT threads are 60°, while BSP threads are 55°.

But how about when the pressure gauge is already inserted into the process? Is there an easy way to tell which connector type an instrument has without removing it? Yes. Because a G connection bottoms out, no threads are visible. In an NPT connection, a few threads or exposed PTFE tape can be seen.

The pressure experts at WIKA USA understand national and international measurement standards, pressure gauges, and which ones are best suited for your industrial processes. Contact us with your questions.

* Even though BSP is now based on metric measurements, this system’s names still reflect their imperial origins. That’s why G and R connection names range from 1/8 to 6 (inches), rather than 6 to 150 (mm). As for the “A” or “B” in some name, such as the common G ¼ B connection type, the letter denote lets users know 1) it’s a male thread, as female BSP threads don’t have a final letter, and 2) its tolerance class.

** To avoid damaging the pressure gauge’s threads, regardless of the connection type, use the right wrench and use it only on the flat area of the socket. Also, never hand-tighten an instrument by the case or the housing.

Hardy Orzikowski Product Management- PressureWIKA USA
After finishing my business apprenticeship at WIKA Germany in 1985 I have worked in many different positions and areas within WIKA. In 1991 I transferred to the US headquarters in Lawrenceville and since 2006 I am product manager for mechanical pressure and temperature instrumentation and accessories. Over the past 35 years I have gathered a vast knowledge in the field of instrumentation and its applications. It is my passion to share the years of experience and product knowledge with our customers and end users through daily communications and blogs like this one.
Related articles
Accuracy All-Welded System Diaphragm seals Pressure Gauges SF6 Thermocouple continuous improvement customer satisfaction furnace tube high temperature pressure measurement quality assurance refinery temperature measurement tubeskin
News subscription
The WIKA news subscription informs you, free of charge, by e-mail whenever there is a new blog article. Simply define what subjects interest you and you'll be kept up-to-date! Subscribe