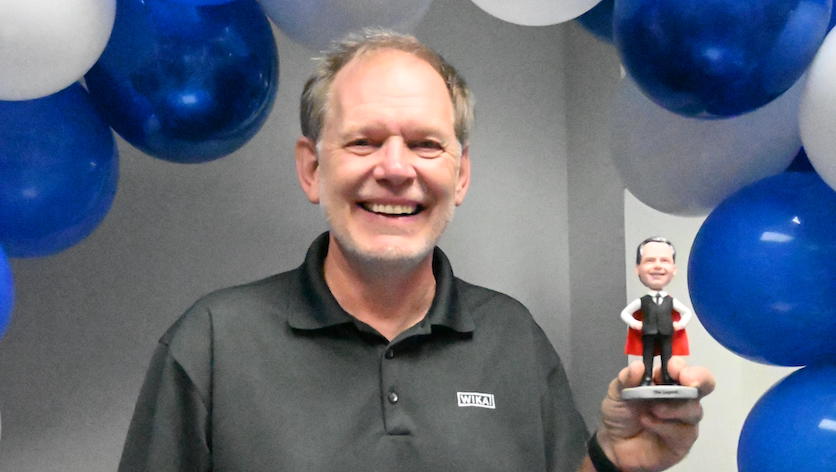 Forty years ago this month, Hardy Orzikowski began his WIKA career as a young apprentice in Klingenberg, Germany. This year, WIKA USA pays tribute to this incredible man.

If a company is lucky enough, it will have someone like Hardy Orzikowski on the team. Yes, he‘s dedicated, driven, talented, collegial, and one of the most knowledgeable specialists in the field of mechanical pressure and temperature instruments. But more than that, his four-decade career with WIKA is the type that’s seldom seen in the business world today.

WIKA, a Family Business Integral to the Orzikowski Family

Hardy has worked at WIKA since 1982, but his relationship with the company goes back decades before that. When he was a young boy living in Klingenberg, a small town about 40 miles south of Frankfurt, his father’s cousin Willy Orzikowski was the general manager at the WIKA Group. Willy’s brother Erich Orzikowski worked in WIKA’s human resources department, and together the two men went to Spain in the early 1960s to hire the first foreign workers for the Klingenberg factory. Willy also traveled to the US several times during that period to help set up WIKA USA, which opened in 1967.

In the 1970s, Hardy’s father, Heribert, was encouraged to join WIKA, which he did first as a truck driver, then later as the personal chauffeur for Ursula Wiegand, the third person to lead this family-run business. Heribert eventually became the groundskeeper for the Wiegand estate, a position he held until his death in 2020 at age 82.

Hardy’s mother, Else, also worked at WIKA. She first calibrated 111.1X pressure gauges on the factory floor. Later she assembled parts at home, a position she held for over 20 years. In the evenings and on weekends, Hardy and his father would gather around the dining room and help Else increase her production capacity. Thus, WIKA and mechanical pressure gauges became an integral part of the young boy’s life.

From Apprentice to Husband to Senior Product Manager

On September 1, 1982, 17-year-old Hardy formally began his career at WIKA with a 2½-year apprenticeship. After completing that, he joined the customer service team for European sales. However, he had his sights set further afield.

“My dream since early childhood was to live in the US,” Hardy said. “And in September 1990, when WIKA USA moved from their original location in Hauppauge, New York, to a larger facility in Lawrenceville, I saw an opportunity to fulfill that dream.”

He proposed to Mrs. Wiegand that he be transferred to the US subsidiary in order to support the new operation. To his surprise, she thought highly of the idea, which is how he arrived in Lawrenceville in June 1991.

Hardy was settling into his new position as a planner for mechanical pressure when his life changed again. Karen Bratek joined WIKA USA in 1992 as administrative assistant to Wolfgang Driftmeier, the CEO at that time. A fellow coworker set up Hardy and Karen on a date, and the rest is history. The couple was married 1½ years later, and today they have four wonderful daughters, all of them recipients of Ursula Wiegand scholarships for children of company employees.

A Brilliant Career, Continuing Stronger Than Ever 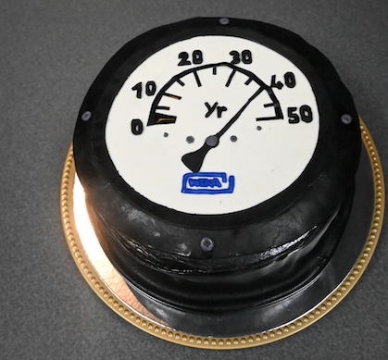 A cake resembling a pressure gauge displays Hardy’s 40 years (and counting!) at WIKA.

Work anniversaries came and went. In 2006 Hardy was promoted to product manager, a position in which he excelled as he developed deep customer relationships and led his team with the broad knowledge and experience that he acquired over the years. On September 1 of this year, he and some of his colleagues entered the training room for what he thought was a routine meeting, only to be greeted by thunderous applause.

His smile grew as he saw his wife, many of his coworkers, the balloon arch in WIKA colors with the years 1982 and 2022 in gold, and a table filled with treats and decorations. His eyes widened as he took in just what was on the table. There was a Bobblehead in his likeness. The black-and-white cake looked like the dial face of a pressure gauge with a 0…50 range, but the measurement unit was in years rather than psi or bar, and the needle pointed to 40. The party organizers – Kaylyn Huerta, Chie Moua, Zlata Bajramovic, Tajma Doglod, Bill Wilson, and Ashley Ansley – also collaborated with the manufacturing floor to produce custom dial faces with his work years to date and the tagline “The man, the myth, the legend,” for Hardy has truly become legendary among company employees. 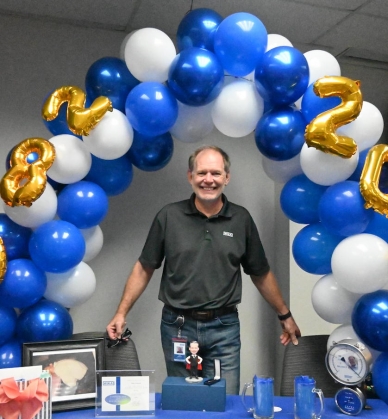 The man, the myth, the legend!

There was much laughter and happy tears as the attendees celebrated Hardy Orzikowski’s four decades of accomplishments and contributions through speeches and a slide show. In turn, he addressed everyone in the room.

“I want to thank you all from the bottom of my heart, not only for the incredible anniversary party but for the great and continuous support through all these years,” he said with great sincerity. “Without you, none of this would have been possible.”

Happy 40th work anniversary, Hardy! We are incredibly fortunate that you are a part of the WIKA USA family.