The extreme temperatures and high concentration of hydrogen in partial oxidation (POX) reactors create a harsh environment for measuring instruments that are not equipped to handle such challenges.

Most POX plants use an integrated process for syngas generation, followed by the purification of the resulting constituent compounds.

Partial oxidation (POX), also called gasification, is the process in which the feed fuel – methane, residual oil, pulverized coal, or another hydrocarbon – reacts exothermically in the presence of a small amount of oxygen. Because combustion is purposefully incomplete, POX produces a gas that contains hydrogen and carbon monoxide. The following is the general POX reaction using methane as the feedstock:

The resulting syngas (synthesis gas) contains useful products. For example, hydrogen injected into the air-fuel mixture of a diesel engine results in a more complete combustion, which means greater fuel efficiency and fewer emissions. Hydrogen is also used as a fuel. Carbon monoxide is critical in the manufacturing of metals and other basic materials, chemicals and petrochemicals, pharmaceuticals, and semiconductors. If the POX reaction uses air rather than pure O2, the resulting syngas will also contain N2, CO2, etc. If the feedstock contains sulfur, H2S (hydrogen sulfide) and other sulfur compounds will be present in the syngas as well.

There are two types of partial oxidation.

The type of POX used depends largely on the amount of sulfur in the fuel. If its sulfur content is greater than 50 ppm (0.005%), it would poison the catalyst during CPOX; therefore, CPOX is not recommended for high-sulfur feedstock. On the other hand, the high temperatures required for TPOX means that equipment and measuring instruments typically have a shorter lifespan.

Although syngas could be used as a fuel, its primary role is to serve as an intermediate resource in the production of ammonia (for fertilizers), methanol, and other valuable components. And this process calls for enriching the syngas using a water-gas shift reaction or another method.

Part of the hot syngas, upon exiting the POX generator, is diverted to generate the high pressure steam necessary for the water-gas shift reaction (WGSR), while the remainder is cooled in a water bath and used as the feedstock in this second step. During WGSR, the carbon monoxide in the cooled syngas combines with water in the presence of a copper-based catalyst to produce carbon dioxide and more hydrogen.

Before the hydrogen and carbon dioxide can be used, further purification and separation are necessary. These processes rely on a series of membranes, molecular sieves, and acid-gas washes.

This article continues with a case study of a syngas plant’s issues with failing thermocouples in its POX reactors. 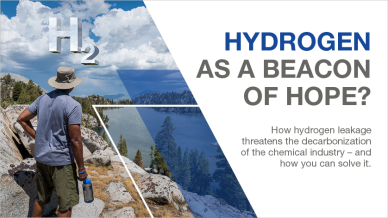