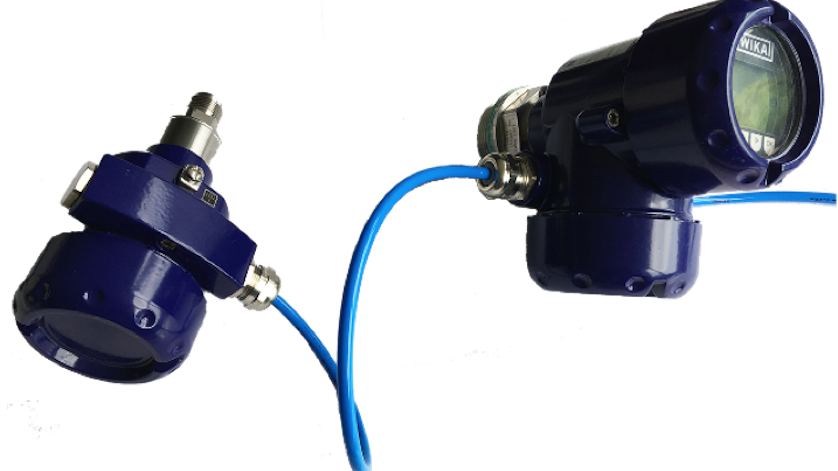 Liquid level monitoring reaches a new height with WIKA’s innovative solution: a system that uses two interconnected process transmitters for differential pressure measurement. This configuration is extremely precise, easy to install and use, and not susceptible to temperature variations.

Originally designed to measure pressure before and after the fluid encounters an interruption, a differential pressure transmitter can also determine liquid levels by calculating the differential pressure between the liquid and gaseous phases of the fluid inside a closed tank. The main problem, however, is that the small pipe (capillary) used to connect those two phases is subject to Gay-Lussac’s Law: Within an enclosed system, the pressure of a gas is directly proportional to its temperature. In other words, higher temperatures lead to higher-than-actual pressure readings (see Part 1 of this series).

WIKA has developed a solution to the challenges of temperature fluctuations and inaccurate readings. Our innovative system takes two of the same process transmitter, such as the CPT-2Xor IPT-2X, and connects them via a signal cable. 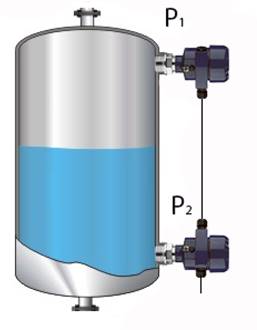 In this configuration, the subordinate process transmitter measures the gas pressure (P1) and communicates that reading to the principal over an internal bus (Figure 3). The principal transmitter measures the liquid pressure (P2) and then calculates the difference between P1 and P2. Using that difference, as well as pre-programmed parameters such as the tank’s geometric variables and the liquid’s specific density, the principal is able to determine the liquid’s precise volume and level. It then sends that value to a control room and/or displays it on the transmitter as a digital or analog signal. The principal also parameterizes and powers the subordinate.

Without needing to use capillaries, this system handles even wide temperature fluctuations with ease. Its accuracy equivalent is up to 0.05 % of the set span. Furthermore, the signal cable is not susceptible to capillary-related failures.

Because process transmitters have all the above components already baked in, it is a simpler, more cost-effective system.

WIKA’s smart solution not only minimizes sensitivity to temperature variations, it also provides other important benefits:

A system that uses two process transmitters for differential pressure measurement is ideal for measuring level in mixed media. In the manufacture of fruit juice, for example, this type of system can determine the concentrate-to-water ratio based on density and, hence, pressure change. Another example is the bilge tanks in ships, where water mixes with lubricants and other fluids. The two connected process transmitters can accurately measure the differential pressure due to the media’s density, and then indicate when the water level has reached the defined limit.

WIKA has long been a global leader in the manufacturing of measuring instruments, but we do more than that. Our engineers constantly look for innovative ways to solve tough challenges. This system of using two interconnected process transmitters to accurately monitor liquid levels is simply one of the many solutions our teams have designed to boost accuracy while saving customers money and time.

Should you measure level by using a level indicator, a classic differential pressure transmitter, or two interconnected process transmitters? Each application has its unique variables that affect the type of instrument you choose. For help in determining which solution is the most efficient and cost-effective for your process, contact the experts at WIKA USA.