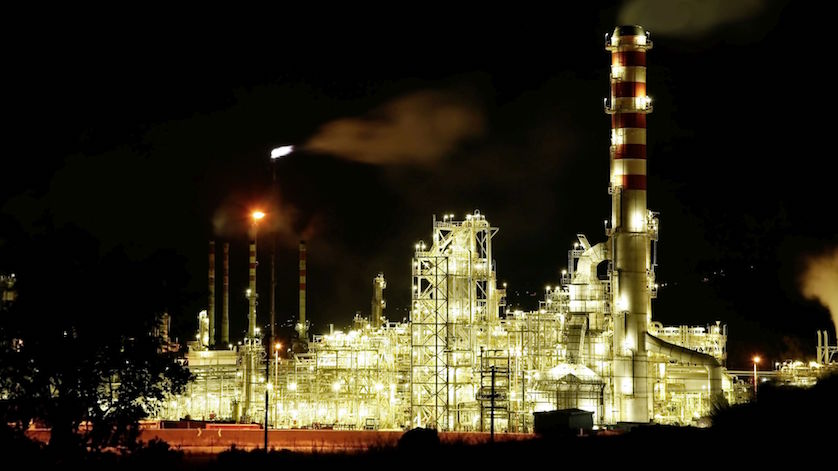 A major U.S. refinery returns to the Gayesco brand for WIKA USA’s quality products, accurate information, expert installation, and exceptional customer service, even though it had an existing Global Frame Agreement with the competing bidder. Back in 1989, Gayesco experts installed a Flex-R® multipoint thermocouple system – a breakthrough in temperature measurement technology – in the hydrocracker of a major refinery in Illinois; the product offered many years of reliable service. When it was time for an update, the client came back to Gayesco, now a subsidiary of the WIKA group, to provide the best solution.

In the late 1980s, the best option for measuring temperature in reactors was pipewell assemblies. These assemblies contained thermocouples inside a protective pipewell and allowed only indirect measurements of the process temperature in line with the nozzle location. With just two nozzles per reactor, refinery operators did not have temperature data for elsewhere in the vessel. Furthermore, as refineries at that time were just starting to use highly reactive catalysts, which work properly only within a certain temperature range, careful temperature monitoring throughout the process was especially relevant. Without proper temperature monitoring, these highly reactive catalysts could increase the temperature so much that it leads to thermal runaways, which are damaging to the vessel and internal mechanics.

Taking into account changing market needs, Gayesco International developed the Flex-R® thermocouple system in 1987. This revolutionary technology allows multipoint radial temperature measurements inside a reactor and can give detailed temperature information across the entire process. What’s more, the thermocouples are robust enough to be placed directly in the catalyst bed, providing a 20-fold improvement in response time, and the number and location of the thermocouples are virtually unlimited. For the refinery in Illinois, the Flex-R® gave the customer greater process control and the ability to run the hydrocracker more efficiently.

Hydrocrackers are shut down every four to five years in order to change out the spent catalysts and to make inspections and repairs/replacements. Every time the unit was inspected, the client found that the Flex-R® thermocouples were still in good shape. (For optimal performance, WIKA USA recommends a new install every 15–20 years.)

In 2014, the client decided it was time to bring the reactor up to date. The project included replacing distribution trays, catalyst support grids, outlet collector internals, and thermocouples. WIKA was one of the vendors the client reached out to for a bid.

The Differences Between WIKA USA and the Competition

One of the bidders claimed it had the best product on the market, such as its larger, more accurate thermocouples. However, once the client started comparing manufacturing and inspection processes, it soon became clear that this bidder’s claims were not entirely true. 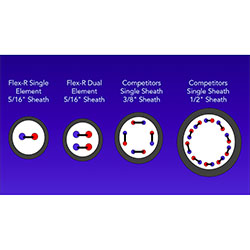 Thermocouples with large conductors last longer and are less prone to failure than those with small conductors. The other bidder’s sensor had a 3/8″ sheath, which, compared to WIKA’s 5/16″ sheath, seems larger and, thus, more rugged. However, conductor size decreases significantly as the number of conductors within the cable increases. The competitor was housing multiple thermocouples inside each sheath, whereas WIKA offered the client single elements in each one. Therefore, although the WIKA product was physically smaller, the conductors themselves were actually larger than the competitor’s.

To calibrate a thermocouple, its accuracy is compared to that of a known standard. When this particular competitor calibrates its thermocouples, it cuts a sample piece of the thermocouple at the end of the bundle and tests just that piece. The measuring junction (hot junction) is never tested; the competitor works under the assumption that the tip will behave the same as anywhere else along the wires.

Refinery operators must be able to wholly trust their temperature measurement systems, as an under- or over-heated reactor, at best, is inefficient and, at worst, is dangerous. Sample calibrations, quite simply, are not precise enough for refineries.

WIKA USA takes the time and effort to calibrate thermocouple points against a NIST standard, and then provides the calibration reports to prove it.

With six decades of experience specifically in the petrochemical, refining, and process industries, WIKA USA understands the custom requirements and unique challenges of its oil and gas customers. We constantly improve our products to make sure they continue to meet the increasing safety demands of the sector. For example, since the 1989 Flex-R® installation at the Illinois refinery, we have 1) added a secondary seal to allow safe operation for extended periods of time, 2) added a safety transition, which allows the refinery to cap off a thermocouple if it is damaged during a turnaround, and 3) introduced a single-disc design that minimizes welds and the assembly length.

For the Illinois refinery, WIKA USA analyzed the previous installation process and the planned reactor update. Based on the information collected, and with the full understanding that delays are expensive, we devised a plan to perform a considerable part of the field preparation outside the reactor, thus significantly reducing down time and minimizing lost revenue.

With such outstanding products and personalized customer service, it’s little wonder that WIKA USA won this bid, even when the competitor had an existing Global Frame Agreement with the refinery.

Among our core values are excellence, honesty, expertise, and customer service. We not only gain our users’ trust, but also maintain it throughout the years. That’s why clients choose WIKA USA and the Gayesco brand, time and time again.