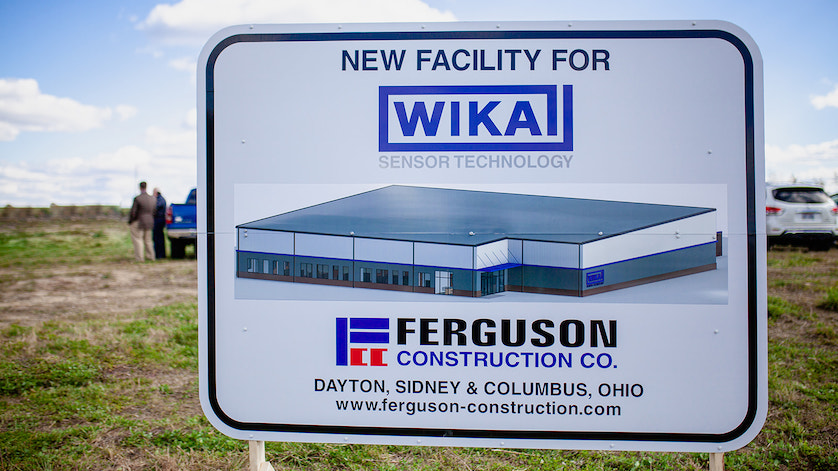 With increasing demand for its load pins, shear beams, and other force products, WIKA Sensor Technology is building a new, much larger home just a few miles from its current facility in central Ohio. 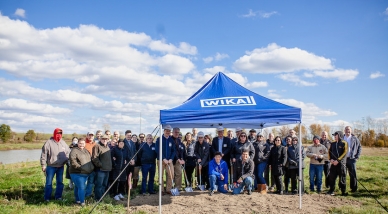 On November 2, a brisk sunny day in central Ohio, representatives from JobsOhio, local and state governments, WIKA USA and WIKA Sensor Technology, and Ferguson Construction Company donned hard hats, picked up shovels, and ceremoniously dug into the dirt at the Creekside Business Park, located in Lewis Center just north of Columbus. Among those cheering the corporate groundbreaking were the 30-plus employees of WIKA Sensor Technology.

The facility is scheduled to open later next year. Not only will it be larger than the current plant located six miles to the south, but it will be much better optimized for designing and manufacturing advanced force and pressure sensors.

The Force of Economic Growth

Force measurement is an integral part of many essential industries. Load cells and load pins are key components of machine building and automation, building construction, industrial vehicles, working mobile machines, shipping, aviation, and aerospace. Force transducers monitor the effect on load-bearing infrastructure like suspension bridges and hydropower plants. Strain sensors of all types simplify weighing, from grain in a silo to filling machines in the food & beverage and pharmaceutical sectors.

To keep up with increasing demands for state-of-the-art force instruments, WIKA Sensor Technology had to expand and streamline its production capacity. There is also the need for more workers in the new facility. In Q1 2022, hiring will begin for 15 new manufacturing positions. With land, construction, and job creation, WIKA’s investment in the greater Columbus area totals $5.4 million.

But the growth doesn’t stop there. The new Creekside campus covers 14 acres, giving WIKA Sensor Technology the capacity to enlarge the facility five-fold – along with the potential to add even more well-paying jobs.

“Expanding our physical footprint and local workforce in central Ohio is key for WIKA to keep pace with our growth, particularly in aerospace,” said Steve McCullough, general manager of WIKA Sensor Technology. “This new facility will position us to better serve our key market areas in the US and around the world.”

WIKA Sensor Technology is the new name for tecsis, LP, which was fully integrated into the WIKA Group in 2018. Glenn Richardson, the managing director of advanced manufacturing, aerospace and aviation for JobsOhio, said WIKA USA could have moved this entire facility to its headquarters in Lawrenceville, Georgia, but valued the local team too much to do so.

During the groundbreaking ceremony, he acknowledged WIKA’s commitment to the state. “We appreciated the way you value the talent of our workforce. We’re going to continue to walk this path with you.”

The feeling is mutual. WIKA greatly appreciates JobsOhio’s partnership on this project, including a grant that allows WIKA Sensor Technology to expand its employee base.

WIKA USA is committed to growing its involvement across the nation and boosting local communities. For example, our economic impact and corporate involvement earned us the Gwinnett County Large Manufacturer of the Year award earlier this year.

Across the country and around the globe, the WIKA Group is woven into the fabric of major OEMs, multiple industries, and local economies. Contact us to find out more about standard or custom force solutions, other measurement products, or excellent career opportunities.

Jessica Woodside Senior Marketing Manager, Campaigns & CommunicationsWIKA USA
I have been working with WIKA since September 2017. I came on board with the company in a Campaign Strategist role, and was promoted to Senior Marketing Manager in charge of Marketing Campaigns, Content Creation, and Communications. I hold an MBA in Marketing from J. Mack Robinson College of Business at Georgia State University and a BA in Literature from the University of North Carolina at Asheville.
Related articles
Diaphragm seals SF6 Thermocouple case study customer satisfaction electrical transmission and distribution gas gas-insulated switchgear high temperature hydrogen oil and gas partnership pressure measurement refinery syngas
News subscription
The WIKA news subscription informs you, free of charge, by e-mail whenever there is a new blog article. Simply define what subjects interest you and you'll be kept up-to-date! Subscribe